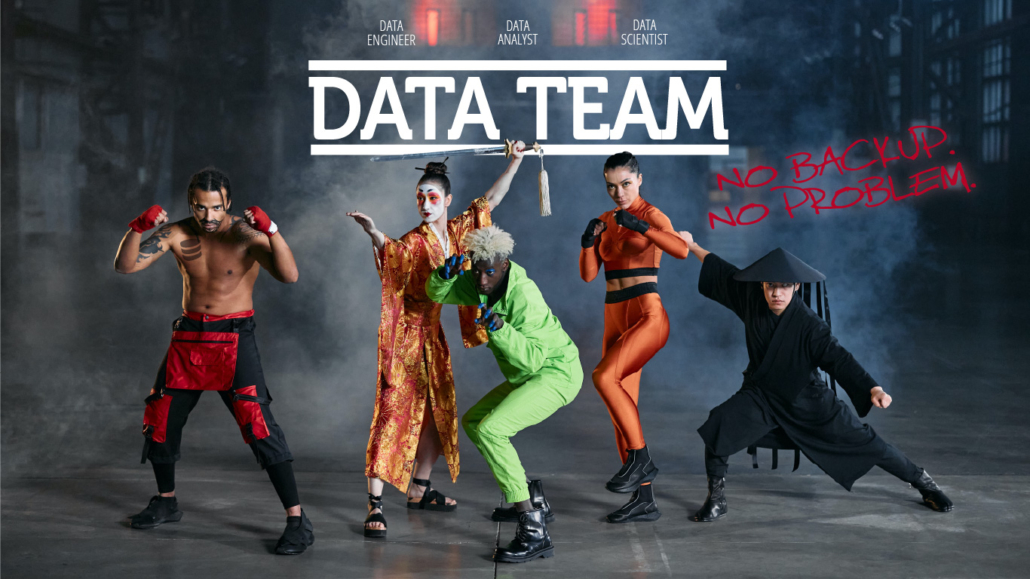 Who are the people on your data team? Data science roles and what they do for your business.

If you’re trying to build out a great data team in your company, you’ve probably noticed that there are lots (and lots and lots) of data science roles out there. And so many of those data job titles sound confusingly similar— it can be hard to make sense of it all, even if you’re in the field.

At Dataspace, we divide data science roles into three major functional areas: data analysts, data engineers, and data scientists. This system seems pretty common (although many organizations still do it differently), and it helps us streamline the hiring process for data science positions. But it still can be a bit perplexing, especially when varied data responsibilities get lumped into one role, which is not uncommon in SMBs and startups.

In this post (1 of 4) we’ll give you a big-picture overview of data science roles and responsibilities and define the three functional areas of data science, data engineering, and data analytics. In subsequent posts, we’ll do a deeper dive into each area and explain some of the more common data roles within them.

The first confounding thing about careers in data science is that data scientist itself, is a distinct role within the field of data science, and so are data analyst and data engineer, but data analysts and engineers are not data scientists. This problem could be addressed by referring to the entire field as something even more generic, and some people do (eg: “data and analytics” or even just “data professionals”). But, many schools and universities use “data science” as the umbrella term, which sets a bar as graduates of these programs continue to enter the workforce.

So let’s stick with that nomenclature and break data science roles down into their three main functional areas:

Data analysts are, by far, the data science roles that are most in demand. In 2020, jobs in analytics made up 67% of data science hires in the U.S. This may seem surprising due to all the hype data scientists get lately, but when you consider that analytics has been a career path for decades before data science became the term of art for the entire field, it makes sense that these roles remain in high demand.

So what exactly is a data analyst, and what makes them distinct from data engineers and data scientists? In the broadest sense, a data analyst is someone who takes the various datasets collected by a business and is able to select, combine, and assess that data in ways that allow them to identify trends and extract insights. Data analysts are also adept at translating their analyses into reports and visualizations that business stakeholders can use to guide decision making.

You can find a variety of data analyst roles that focus on different types of business data or different points in the process of understanding it. Some examples of the former include; business intelligence analysts, marketing analysts, and product analysts; while analytics developers, data reporting analysts, and data visualization specialists are also on the spectrum.

We will dive deeper into the role of data analysts in an organization in a subsequent post.

The difference between data analysts and data scientists is probably the second most frequently-confused area of data science roles. Many think of the analyst as a junior role to the data scientist, however the reality is not so simple. Yes, both roles will determine the data they need, decide how to combine it, and then analyze it in a variety of ways. But there’s a big difference in how they seek to understand the data they work with. As defined above, data analysts look at what has happened in a business to identify trends and report on it. Data scientists, on the other hand, apply complex algorithms and machine learning models to derive insights and predictions based on statistical significance. The article, Distinguishing Data Roles: Engineers, Analysts, and Scientists, (which offers a great primer on data science roles) sums it up nicely:

“A data scientist should be able to sift through data in the same way as an analyst, but also be able to apply statistical techniques in order to differentiate between signal and noise.”

Because of the advanced knowledge of statistics and machine learning required for the role, data scientists command higher salaries and are more likely to be employed by enterprise organizations. But, as a sort of “elite” role, data scientists made up only about 10% of the data-focused hires in 2020.

Of the three major data science functions we describe in this post, data scientist appears to have least variability in job titles. (Of all the data science roles we worked on in 2021, only 2 did not have “data scientist” in the title.) This could be simply because it’s the newest kid on the block in the world of data roles, or perhaps it’s because data science and analytics are so complementary to each other.

We’ll take a more in depth look at the value data scientists provide an organization in a future post.

In contrast to data scientists and analysts who ‘suck data out of’ the data pipeline, data engineers work on the other end of that pipeline—and they are the ones who build it, maintain it, and keep data flowing through it from internal and external data sources. As a whole, data engineers are tasked with ensuring raw data is accurately collected, securely and reliably stored, and able to be translated into something data scientists and analysts can use. But within data engineering, there are many distinct roles at all phases of that process: developer focused on specific languages or technologies, cloud and warehouse architects, and ETL and data transformation specialists. All of these data-focused roles are heavily dependent on technical skills, such as programming and cloud management.

Data engineers are essential members of a mature data team. It often takes multiple data engineers with varying specialties to build and manage the pipelines that support the work of a single data scientist. As such a high-value role, data engineers made up about 23% of all data science hires in the U.S. in 2020, with salaries that rival, or even exceed, data scientists.

We will break down the role of data engineers in supporting business in a later post.

We are experts at finding and vetting highly-qualified data scientists, data engineers, and data analysts for any role, because we are “data people,” too. Contact us to get started.