For those who’ve been wondering why schools don’t teach at least introductory programming, a large group of industry and government leaders have drafted and signed a petition asking congress to provide funding for this.

While I graduated from an engineering university (Lehigh – our mascot actually was the Engineer!) – I went there for accounting. I gravitated to computer science classes and probably should have changed my major but that’s a story for another time.

That background, combined with how technology touches every aspect of life today, leaves me amazed that we don’t do more to encourage our kids to consider careers in engineering and technology.  We teach them a lot of things that are critical to functioning in society – how to read, how to add, how our country was formed. We just don’t teach them the skills to build the future.

As parents of a junior at a well-regarded public high school (and two awesome public high school graduates), my wife and I are amazed that none of our kids was ever taught what engineering is or what engineers do. Want to know the difference between science and engineering? Don’t ask my kids (or their peers) – they were never exposed to that. How can it be that they are required to take English, Math, Science, Social Studies, and a foreign language but have never seen a line of program code? Are they prepared for the future? Are they, perhaps, ignorant of careers that can be challenging, satisfying, and what the US and the world need in a post-industrial era?

In my field, data warehousing and big data, I work with a lot of immigrants and folks here on temporary (H1b and L1) visas. They are mostly bright, hard working folks who’ve completely uprooted themselves to be here, in America, where we have a need. I am not against working with folks like this – hell, my grandparents and great grandparents shared some of the same traits, minus the programming skills sets.  And it scares me to hear political candidates say they’re going to keep such folks from coming here. I need them, my clients need them, and the US just doesn’t produce them.

Would I hire American citizens to do these jobs? Absolutely. But, where are they? For almost every position we advertise, it is extremely rare to get even one resume from someone raised in the US.

So, yes, I am in favor of bringing programming into our schools. I’m even in favor of requiring it – at least one, introductory course for all students. Which brings me to the petition. I signed it – You should too. Click on the image below to go right to it… 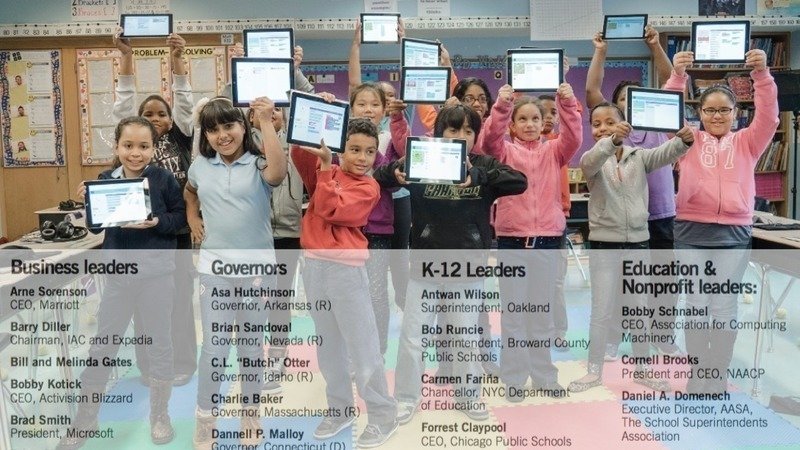 When Business Moves Faster than BI